On his first pass along the patio, Michael’s left foot hangs by his side. It has been several days since his last walk and his muscles need to get their memory back.

As they walk beside him, Support Worker, Tania, and Assistant in Nursing, Marina, gently encourage Michael to bring his foot down. Michael closes his eyes and concentrates. With each short lap of the concrete, and as he gets his rhythm, he puts more weight on his left side. 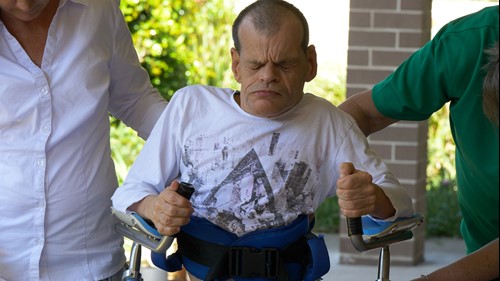 Tania, who has worked extensively with Michael since joining Lifestyle Solutions last year, says the entire team at Michael’s specialist accommodation in Woy Woy are dedicated to helping him walk more often.

“It’s one of his greatest joys, you can see it on his face, but he doesn’t get to do it often as it puts such a strain on him. I give his legs a massage to loosen them up beforehand but it’s still uncomfortable and a challenge for him at the start. Slowly though, combined with his other therapy, we will help him walk more and more until hopefully Michael can enjoy a walk every day.” 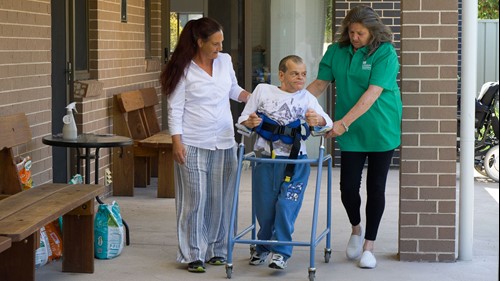 After half a dozen laps of the patio, Michael is using both feet to move along and getting faster each time. Marina tells Michael if he goes any faster, he will be running. Michael vocalises approvingly, and a satisfied grin breaks across his face.

The next few laps are joyous as Michael treads confidently, though you can tell he is tiring. At the end of the session, Tania and Michael rest together on the patio and hold hands. 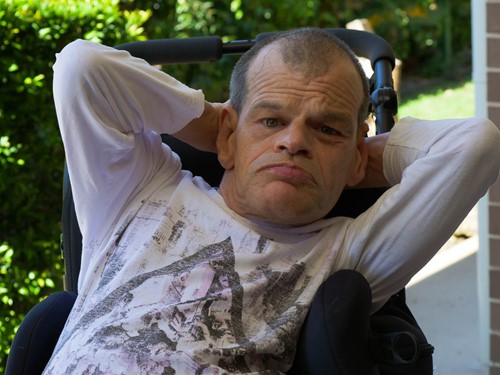 “We often sit here and hold hands and look at the garden. Michael’s a very affectionate guy and like everyone enjoys connection and personal attention. The people we support think of us as family, so it’s important after we do something like his walk that we also make time just to sit and rest and be together. It’s what family do.”