Article - Hanging out with Pete and Rusty 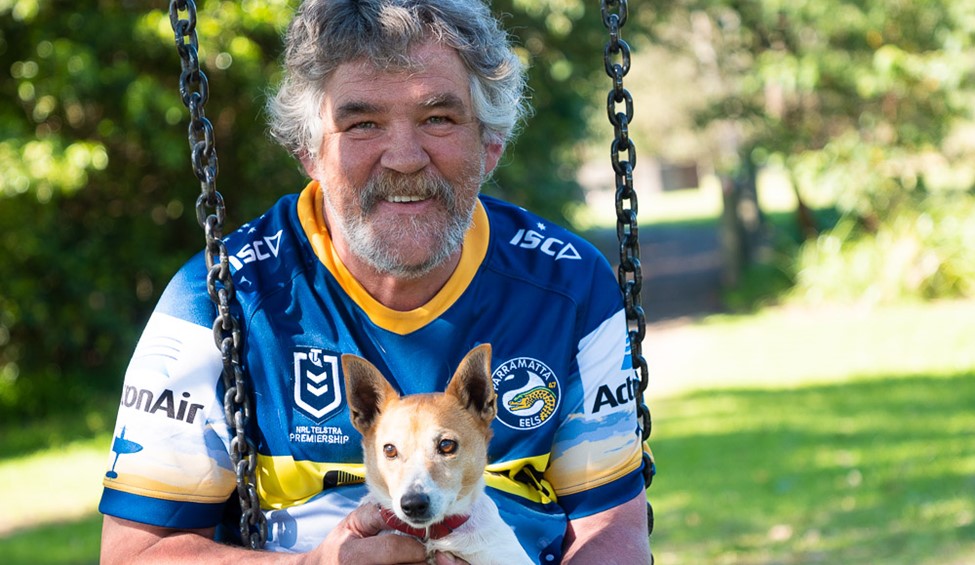 Rusty is being well behaved in Pete’s arms though I can sense we are on a timer. The Terrier Cross was happily chasing balls before being rudely interrupted for the photo opportunity.

“What do you love about Rusty?” I ask from behind the camera.

As Pete begins to speak, Rusty turns his head and plants a kiss on Pete’s nose, as if to say, “You’ve got this buddy – I love you too.”

Pete’s had Rusty for about six years - since Rusty was a puppy.

“He’s my companion, we go everywhere. I take him walking up to Brickworks Park every day. "Wanna go for a walk Rusty? Walk? “

It’s a blue-sky high-cloud day. Spring chasing winter. We walk the couple of blocks from Pete’s Supported Independent Living (SIL) house to the park. Rusty stops to sniff and wee on things. At the park Pete lets Rusty off the lead and the little dog tears off to chase shadows.

“We used to play here when I was a kid.” Pete is beckoning to the scrubby hill rising in front of us. “All us kids would play here all the time. My dad was a good man. He worked hard and bought us a house. We lived just near here for fifty-six years but then we had to sell the house to pay for mum's nursing home.”

Pete calls Rusty over and he sits on the swing with Rusty on his lap so I can take more photos. Rusty wriggles out of Pete’s arms. Pete leans back on the swing.

“Before my dad died, he played Santa for all the kids up at Twin Towns Services Club. I collect Santa Claus statues now. I have over one hundred and fifty. Do you want to see them?”

We walk back to the SIL house. It’s modern and clean and well positioned in a suburban street. Rusty isn’t allowed inside and obediently follows his nose out into the neat garden when Pete closes the sliding security door behind us.

Pete shows me the Santa’s. There are elves as well. It’s magical, and each one is named after a family member or someone special in Pete’s life.

I ask Pete if we can do a story about his Santa’s for Christmas.

Lifestyle Solutions' Supported Independent Living (SIL) program provides accommodation options that allow the people we support, such as Peter, to live more independently. These programs are individualised, and we strive to accommodate animals such as Rusty, where a long standing or therapeutic bond has been established.